New York City’s waste and recycling services have been hit by Covid-19, with its budding organic waste collection service a high-profile casualty. Small-scale composters have stepped into the breach

With the onset of the Covid-19 pandemic in March this year, New York City (NYC) saw its sanitation budget unexpectedly slashed from $7 million, leaving just $2.86 million for food waste recycling in a city of 8.4 million people. This led to the suspension of the city’s kerbside organic waste collection service, a voluntary service that Mayor Bill De Blasio had committed to building into a mandatory citywide service in his 2013 mayoral campaign, and which the City Council had pledged $21.1 million to.

Suddenly, a service that served 3.3 million New Yorkers across certain communities in Queens, the Bronx, Brooklyn, Staten Island and Manhattan and previously credited as the most ambitious of its kind in the US was gone, with food waste drop-off locations suspended until at least summer 2021. A vacuum opened which threatened to see all of NYC’s organic waste end up in landfill, where it would release powerful and harmful greenhouse gases.

Although the citywide compost collection service was effective, the participation and capture rate was low. Sarah Currie-Halpern at consultancy ThinkZero LLC attributes this to a ‘lack of education for residents’ and the programme’s voluntary basis, which resulted in the service being more expensive than trash collection on a per pound basis.

Without a free, citywide programme, the citizens of New York City risk the loss of good waste habits, which may be difficult to pick back up if the city council’s programme is ever reinstated. Sarah Currie-Halpern believes this is a serious cause for concern: “In 2002 Mayor Bloomberg suspended the collection of some recyclables including plastic and glass because of budget deficits at the time. Many people agree that NYC’s recycling participation never fully recovered from this.

“According to then Commissioner Farrell, NYC’s recycling rate was about 19.7 per cent in 2001, today its recycling rate hovers around 18 per cent. The same could be true for organics collection once it’s reinstated.”

Whilst the City’s organics collection program was still functioning, participation was already an issue. According to Anna Sacks, a Senior Associate at ThinkZero who led an online petition ‘Save Our Compost’, which received over 21,000 signatures, New Yorkers lacked an understanding of the importance of composting, and the sanitation department’s already limited budget meant that mass education was impossible.

She also points to the lack of incentives for New Yorkers to engage in organic waste collection: “Recycling is the law in NYC; a building can’t decide to not recycle. If a building does not recycle, or recycles incorrectly, they might receive a fine. Since kerbside composting was a voluntary program, there were no consequences for not participating, and so some people and buildings were not motivated to participate in it.”

However, she maintains that cuts were not the answer: “This budget involved difficult choices given the Covid-19 budget shortfalls. Given the unwillingness to reduce other areas of the budget, particularly the New York Police Department, I understand suspending the brown bin program. The other option – ramping it up and creating incentives and disincentives – would save the city money in the long run, once it’s fully utilized, but cost more in the short term.

“I think the Council should have completely restored funding to the community composting programs, both GrowNYC and the Compost Project. This would have amounted to $7 million. Instead, they restored funding to $2.86 million for the Compost Project. This was an important restoration, but without the $7 million in funding many of the food scrap drop off sites that existed pre-Covid, located in farmers markets and by subway stations, are not able to reopen.”

With the suspension of the city’s organics collection service leaving a gaping hole in the city’s sanitation services, one group were left to step into the breach: micro-haulers.

Originally set up in 2010, New York City’s micro-haulers provide a small-scale collection service for commercial and residential waste, using bikes and low-emission vehicles to transport organic waste throughout the city, diverting organic waste from landfill in order to keep the inherent value in organic waste in local communities, producing jobs and developing an environmentally responsible economy. 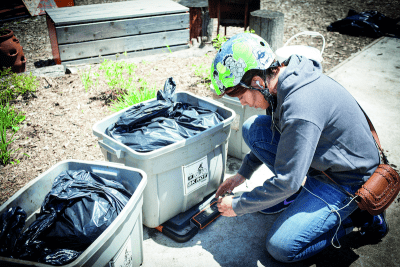 Micro-haulers have been in operation for the past 10 years, but found themselves in a legal grey area for most of their existence. In 2019, however, following a grassroots campaign, micro-scale waste collection was written into NYC law as part of a wider overhaul of the city’s commercial waste system. Prior to the coronavirus pandemic, micro-haulers serviced businesses generating smaller amounts of food, which failed to qualify for collection by waste truck. As well as providing a collection service, micro-haulers provided weight data reporting, and would help clients understand the waste they generated, where it would go, and the subsequent environmental implications.

When the pandemic hit, the micro-haulers extended their services beyond commercial waste collection to residents throughout the city. For a small weekly fee, haulers collect organic waste from individual households, transporting the waste to intermediaries, who then deliver them to nearby farms.

In the face of an increasing workload for the micro-haulers of NYC, Sandy Nurse and Renee Peperone, co-founders of Just Hauling, Ceci Pineda, Executive Director at BK ROT, and Meredith Danberg-Ficarelli, Director of Common Ground Compost LLC, set up the NYC Micro-Haulers Trade Association (MHTA), aiming to support members’ operations and their growth, in order to protect and expand the organic waste micro-hauling sector in NYC.
MHTA says: “Through practice and shaping local policy, we work to reduce the carbon footprint of organic waste leaving our communities, improve transparency between waste generators and organics collectors, develop local and accessible economies, reduce the impact of waste systems and infrastructure on frontline communities, and provide information and advocacy.

“We are building the foundation for localised, just systems of dealing with our waste that give back to our communities.”

But are the micro-haulers up to the task of filling the gap left by the City Council? According to NYC MHTA, not right now: “We can manage some of it but not all of it, and not equally. NYC’s waste is immense and constant. Micro-haulers are an innovative, nimble and an impactful, on-the-ground solution.

“Once incorporated into NYC’s new and more resilient commercial waste system, micro-haulers can scale up the many benefits we provide, and if included and supported by City infrastructure, we can easily adapt to meet needs in times of crisis. Micro-hauling labor must be compensated with a living wage to support workers.”

However, micro-hauling only presents a solution for those who can afford it – although the citywide programme did not include every neighbourhood, it was funded by taxes, and therefore was free to use. In order to provide a living wage to their workers, micro-haulers are required to charge a fee to users, and therefore it is a service only afforded to those who can pay.

NYC MHTA insists that micro-hauling should only be a temporary solution: “We believe that micro-hauling can play an essential part to help bridge the gap for the time being, until the City can restore funding for residential composting, but we do not believe that the cost for residential composting should now or forever be borne by residents that have the ability or willingness to pay.

“The city needs to prioritize organics by making a bold commitment requiring all residential buildings to compost. This is no small feat. A consistent, accessible, and pragmatic system must be built and implemented for organic waste collection and processing.

This article was taken from Issue 100

“To achieve broad behavioral change across NYC residents, the city must conduct multi-lingual, multicultural, and multi-generational education and outreach to both build the system and implement it. A citywide program must give motivated renters the power to compost regardless of landlord participation, and must support and expand upon existing neighborhood efforts to create a resilient and accessible system.”

If they were to service the city on a permanent basis, micro-haulers would also face a capacity problem, according to Currie-Halpern: “The burden of diverting NYC’s residential organic materials from landfills is huge. According to the sanitation department’s 2017 Waste Characterization study, roughly 1.1 million tonnes of organics are generated per year by NYC residents. Given the relatively small number of micro-haulers and the small amounts of tonnage they can collect and manage, it does not seem possible for them to collect these quantities.”

For now, the citywide programme remains scrapped, with many drop-off locations suspended until next summer. Though they cannot take on the entire burden, micro-haulers have certainly proven their capacity to step up in times of crisis, and there seems to be an opportunity for their inclusion into NYC’s commercial waste collection infrastructure moving forward. Whilst they are unable to service the entire city alone, micro-haulers may be able to work alongside taxpayer-funded collection services in future, continuing to help New Yorkers understand the journey and impact of their organic waste and work towards a cleaner, greener city.

The Indian Government has banned all imports of solid plastics waste as part of a drive to tackle pollution and littering.

The Chinese government is set to invest £29 billion in establishing better waste practices over the next three years to address the levels of soil and water pollution caused by growing landfills.

A team from the University of the West of England has successfully carried out a field test of a urine-powered form of electricity generation in a remote rural location in Uganda.

Waste management company Biffa has announced a three-year partnership with UK-based charity WasteAid, which will see the company support WasteAid financially and share its expertise with communities in low-income countries to improve the management of waste.

China has established a year-long crackdown on the illegal smuggling of foreign waste, as it also continues to reject poorly-sorted legitimate shipments, sending 160 containers of contaminated paper recycling back to Ireland.