China has announced the launch of a new customs crackdown on the smuggling of foreign waste, entitled ‘Blue Sky 2018’, which will run from March to December 2018.

Launched yesterday (6 March) by the General Administration of Customs of the People’s Republic of China, the country’s customs authority, Blue Sky follows in the same vein as previous campaigns including 2013’s Operation Green Fence and 2017’s National Sword Campaign.

This campaign will focus on the 24 grades of solid waste banned from the start of the year, including unsorted mixed papers and post-consumer plastics, as well as enforcing the contamination limit of 0.5 per cent for all other materials which was imposed on 1 March.

According to Zhang Guangzhi, a spokesperson for China’s customs authority, the networks which facilitate the ‘smuggling of foreign rubbish’, such as waste-trafficking gangs and smuggling channels, will be the targets of concerted action, while the supervision of imported waste will be strengthened through co-operation with environmental and law enforcement authorities. 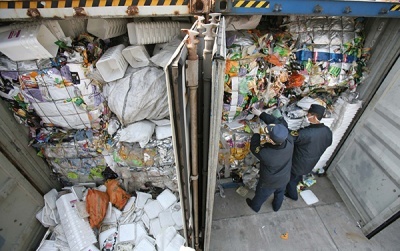 It was also announced that between 2 February - which marked the launch of the first anti-smuggling raids of the year in Shenzhen, Tianjin, Harbin and Qingdao - and 27 February, the General Administration of Customs had uncovered 69 cases of smuggled waste amounting to 50,000 tonnes of illegal material.

The launch of the new customs operation reinforces China’s determination to clean up its act on the environment; ‘Blue Sky’ is a reference to clearing the thick layer of smog that has become synonymous with Chinese urbanisation.

Further restrictions could be on the horizon, with a paper released in December 2017 by the China Council for international Cooperation on Environment and Development (CCICED) suggesting that ‘a further stop to waste material imports will be in place by 2019’, while Chinese Premier Xi Jinping declared his intention to completely ban the import of ‘foreign garbage’ at the 2018 National Congress of the Chinese Communist Party (CCP).

The prospect of further restrictions will be greeted with dismay by the UK recycling industry, which has been scrambling to find alternative end destinations for the 494,000 tonnes of plastics and 1.4 million tonnes of recovered paper it sends to China every year. In January, at a hearing led by Parliament’s Environmental Audit Committee on the impact of the first wave of restrictions, Craig Curtis of the Recycling Association described the measures as ‘the biggest problem the recycling industry has ever faced’.

China could introduce further waste material restrictions by 2019
By
Lidia Creech
| 12 December 2017 |
Add a Comment
China is eyeing further restrictions on waste imports in the coming years beyond those set to come into force from the start of 2018, according to a new paper released by an advisory body including China’s Vice Premier and Environmental Protection Minister.

The UK government must take the lead in creating domestic secondary markets for recyclable plastic waste as China places bans the import of 24 grades of solid waste, says the Resource Association.

China’s ban on the import 24 grades of solid waste has been known to the UK recycling industry since July of last year, so how have the major companies been preparing for the disruptive new policy?

Chinese customs authorities have intercepted over 500,000 tonnes of illegal waste under the ‘Blue Sky 2020’ campaign and plan to continue the crackdown on illicit domestic and foreign waste imports.

With China’s ban on 24 types of plastic and paper waste in place from 1 January, and measures set to get stricter, the Environmental Audit Committee is calling for evidence on whether the UK is prepared for the impact.

The Association of European Producers of Steel for Packaging, has shared its 2025 vision for recycling, detailing four key areas that will prevent steel packaging from being wasted

Food and drink companies are well ahead of deadline with CO2 reduction targets met five years early, leading to an updated list of sustainability commitments by FDF members

A round-up of news from the waste and resources industry