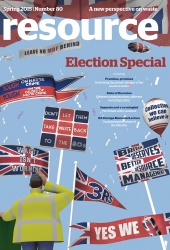 To most, Denmark brings to mind popular TV dramas, sweet pastries and Lego. But there is one part of the nation’s identity that those in Borgen (the real-life seat of government, that is) are keen to eradicate. For some decades now, Danish waste management has been dominated by municipal incinerators. Plants were common in the small dormitory towns that popped up in the 1960s, but it was the energy crises of the 1970s that persuaded the Danish government to promote district heating, reducing dependency on oil and increasing supply reliability. This district heating, created by waste- burning plants, now provides around 20 per cent of energy to Danish homes, and up to 98 per cent of households in Copenhagen.

It is perhaps this reliance on incineration that is behind the staggering amount of household waste produced: it’s currently hovering around the 2.5 million tonnes per year mark (as of 2011), after exceeding 3.5 million in 2008. In a nation of 5.7 million inhabitants, that’s around 450 kilogrammes (kg) per person. Indeed, according to Eurostat, Denmark’s municipal waste generation per capita is the highest in Europe, 747kg per person in 2013 (compared to a Europe-wide average of 481kg). Around 80 per cent of this household waste, including high-calorific organic waste, is sent straight to the nearest incinerator (only three per cent is sent to landfill nationwide), with seemingly little appetite or need to develop more efficient processes.

If approved by the CMA, Macquarie will own 100 per cent of SUEZ UK’s share capital