Recycling efforts in England, Wales and Northern Ireland resulted in 3.9 million tonnes of CO2 being saved in 2014/15, the equivalent of flying from London to New York and back 1.5 million times.

That is according to Eunomia Research & Consulting’s fourth annual Local Authority Recycling Carbon Index, which seeks to quantify two of recycling’s key benefits – avoiding waste and protecting raw materials – in terms of the subsequent reduction in carbon dioxide emissions per person for each authority.

In total, the CO2 savings for the three countries improved by over 20,000 tonnes from 2013/14. Despite a slowdown in its rate of improvement, Wales still has a significant lead on England and Northern Ireland in terms of carbon savings, with an average saving of 84 kilogrammes (kg) per person.

Graphic: Eunomia Research and Consulting
Two-thirds of Welsh authorities improved their carbon performance over the year, with improvements prompted by the Welsh Government’s ambitious targets and focus on improving recycling meaning that no Welsh council is categorised by the league table as a ‘Poor Performer’ (there are four divisions – High Flyers, Good Performers, Mid Performers and Poor Performers).

In England, the stuttering recycling rate has manifested itself in a plateauing carbon savings figure of 67kg per person. A sharp rise in Northern Ireland, where 77 per cent of councils improved on their previous results, enabled the country to slip into second place with 68kg per person.

England takes the good with the bad

Despite the lack of progress across England as a whole, seven of the top 10 performing local authorities are English.

The leading carbon-saving council across the three countries is Cheshire West and Chester Council. Eunomia explains that the council’s high recycling rate and source-separated collection system minimises the need for an energy-intensive sorting process and has led to a carbon saving of 109kg per person.

North Somerset followed closely behind with 108kg per person, while the Welsh authority of Ceredigion, which reported a Wales-high recycling rate of 68 per cent for 2015/16, was third with 104kg per person.

A new collection system that saw the amount of recyclable material collected rocket from around 300 to 860 tonnes per month between September and December 2013, saw Middlesbrough Council experience the biggest improvement since Eunomia began producing the index, jumping from 45kg per person to 63.

Along with the table-toppers, the 21 worst performing councils were all from England, with the London boroughs of Tower Hamlets (26kg) and Lewisham (29kg) and Bradford (30kg) at the foot of the table.

An interactive tool on the Eunomia website allows you to see results from each authority across the three nations and compare them with others.

The index was created to offer an alternative to tonnage-based recycling rates to assess councils’ recycling systems, as Eunomia says that the environmental impact of different recyclable materials ‘varies hugely’.

For example, an authority that collects a lot of green garden waste but less paper and packaging will have a high recycling rate, but will be ranked lower in Eunomia’s Recycling Carbon Index because more carbon is saved from recycling materials like metals, plastics and paper. 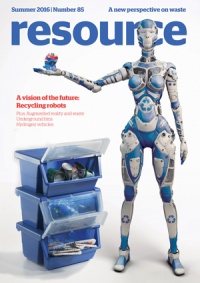 A fuller look at the Carbon Index and comment from Eunomia's Simon Hann will be featured in September's issue of Resource
Commenting on the Recycling Carbon Index, Eunomia Director Joe Papineschi said: “Progressive waste management policies, devolved governments and new collection systems are having a positive impact on the CO2 performance of recycling systems.

“Amidst some mixed results, there are some really outstanding stories. For example, councils collected eight per cent more food waste last year than in 2013/14 – despite only 37 per cent offering separate food collections.”

The figures are created using data of tonnages of various materials reported by councils through the WasteDataFlow system and carbon savings estimates derived from Zero Waste Scotland’s Carbon metric. Because of differences in the reporting regime, however, data on Scottish authorities is not comparable to that of the rest of the UK, so its authorities are not included in the index.

More on Eunomia’s Local Authority Recycling Carbon Index for 2014/15 can be found in the summer issue of Resource, out early next month.

Merthyr completes remarkable recycling turnaround as Wales hits 60 per cent rate
By
Edward Perchard
| 24 August 2016 |
Add a Comment
Restrictions on residual waste and a new kerbside-sort system have seen Merthyr Tydfil go from being one of the worst performing Welsh councils to one of the best over the course of a year, according to new data.

An improving index
By
Simon Hann
| 6 May 2015 |
Add a Comment
Despite stutters in recycling figures, Eunomia’s third Local Authority Recycling Carbon Index (included with this issue of Resource), shows the carbon figures associated with household collection are improving. Simon Hann has more

Carbon Calculations
By Resource |
4 January 2010 |
Add a Comment
The first recycling targets to reflect the relative carbon savings of processing procedures could be introduced as early as 2011.

Cleaning up the city: the Bristol Waste Company

In setting up the Bristol Waste Company, Bristol City Council is getting its recycling into ship-shape conditions.