With a LARAC Award for Best Waste Minimisation or Prevention Project under its belt and acclaim from the media, South Ayrshire Council’s Beach Restoration Project is clearly doing something right. Leonie Butler learns more 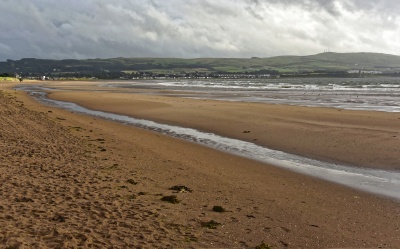 If you head up to Scotland’s beaches, you won’t be disappointed – they are some of the most beautiful in the world (and you might even have one all to yourself, what with the weather, and the midges!). Yet, maintaining miles and miles of unspoilt coastline is a big and costly job for Scotland’s local authorities. But one council is forging ahead with a new way of making the most of the organic waste found on the beaches.

South Ayrshire Council had, for years, maintained 28 miles of beach along the bottom west coastline with mechanical beach cleaning equipment that gathered organic beach wastes and other debris before it was transported long distances to landfill sites, incurring expensive transport and waste disposal costs. And although it meant South Ayrshire consistently achieved Seaside Award status, it was financially unsustainable. Not only that, but the dune system was suffering and becoming more fragmented.

Following consultation with the Scottish Environment Protection Agency (SEPA) and Scottish Natural Heritage in April 2013, it was agreed that it would be better to reuse the organic wastes (mostly seaweed) collected from the beaches to stabilise and nourish the local beach ecology, especially the dune formation of the foreshore. Crucially, this would also save on expensive landfill disposal costs.

South Ayrshire’s Stratton Macdonald, Service Coordinator Strategy and Technical Support, explains that the council worked closely with SEPA to ensure it was fully compliant with all relevant waste legislation: “The reuse of beach materials from beach cleaning operations at the same beach from which they were gathered was viewed as very much embracing reuse as part of the solution to the council’s need to reduce beach-cleaning costs and at the same time reduce coastal erosion and prevent loss of dune formation. Nevertheless, we are the first council in Scotland to be issued with a waste exemption certificate by SEPA for this type of reuse activity.”

This article was taken from Issue 88

The gathered beach wastes are now first litter-picked to remove any man-made debris, and the remaining organic beach waste is then reused to fertilise, nourish and stabilise the dunes, resulting in new growth of marram grass. Macdonald explains: “We have mechanical beach-cleaning machines and tractors available to gather up the beach wastes [that we] have used... for many years. We then carry out a litter pick once the beach wastes have been deposited at the base of the sand dunes to remove any man-made debris; this is not too onerous as the great majority of the beach wastes comprises seaweed. [N]ormally, one tractor driver and two labourers [carry] out this procedure on each beach, and we remove roughly about 1-2 tonnes of man-made debris each week from each beach in the summer beach-cleaning season. Any non-organic wastes are removed off site for recycling, waste treatment or landfill disposal depending on their composition.”

Macdonald is justifiably proud of what the council has achieved: “The council’s Beach Restoration Project has been a very positive change to our current business model, as it is diverting over 3,000 tonnes of gathered beach wastes from landfill each year, thereby saving an estimated £246,000 each year on transport and landfill disposal costs.

“What’s more, the local beach environment and sand dunes that were nearly completely eroded 10 years ago have now been stabilised and recovered. As the dunes develop, they will assist as a natural sea defence to the foreshore area, helping to minimise land erosion and potential flooding.”

Figures show that within a year, beach waste to landfill had been reduced by more than half and continues on a downward trajectory, with less than 400 tonnes of beach waste sent to landfill by September in 2014.

The system has already been expanded to other beaches within the district where coastal erosion and fragile dune systems are evident. Macdonald concludes: “Our project demonstrates how sustainability can be embedded into everyday working practices and improve resource efficiency with positive environmental effect.”