The BBC has attracted criticism for its coverage of ‘oxo-biodegradable’ plastics, with both proponents and detractors of the controversial material technology questioning the broadcaster’s reporting on the subject, including naturalist Chris Packham’s appearance on The One Show in support of ‘oxo-biodegradables’.

The criticism relates to a segment in last Thursday’s BBC News at 10 (19 July), as well as a special plastics episode of the BBC’s The One Show, broadcast on 16 April, where the debate surrounding ‘oxo-biodegradables’ was discussed.

‘Oxo-biodegradable’ plastics are a form of plastic that its proponents claim biodegrades significantly faster in the presence of oxygen than conventional plastics, turning into supposedly harmless biodegradable matter over a period of a few months to a few years. The material technology is widely used in Africa and the Middle-East, with Saudi Arabia introducing a law banning all single-use plastic bags except those made using ‘Oxo’ technology.

However, its critics contest the science behind this, stating that the plastic does not actually biodegrade, but in fact breaks down into tiny microplastics, which are then released into the environment – much like conventional plastics.

Due to reservations regarding the technology, the European Commission announced in January that “a process to restrict the use of oxo-plastics in the EU will be started”, with the European Parliament passing a directive in April stating that ‘oxo-biodegradable plastic packaging shall not be considered as biodegradable”. More than 150 organisations, including Marks & Spencer, PepsiCo, Unilever, the Bio-Based and Biodegradable Industries Association (BBIA) and ten Members of the European Parliament (MEP), called for an end to the use of oxo-degradable plastic packaging in November last year.

The criticism of the BBC’s reporting of the debate centres on its coverage of the ‘oxo-biodegradable’ plastic technology d2w, a salt-based additive which its creator (British company Symphony Environmental Technologies) says breaks the plastic down into safe biodegradable material.

The segment on BBC News at 10 featured both Michael Laurier, CEO of Symphony, and Professor Richard Thompson of the University of Plymouth, who has been testing the veracity of the claims made by proponents and manufacturers of ‘oxo-biodegradable’ plastic, and has suggested that the material does not, in fact, biodegrade but fragments into millions of tiny microplastics.

During the segment, Laurier said: “This is what we describe as an insurance policy if it ends up in the environment. It probably wouldn’t even get to the ocean as a piece of plastic, it would probably end up in the ocean as a biodegradable material. But if you do just drop it in the ocean, which has been our studies, we’ve shown versus non-degradable products that it degrades and biodegrades an awful lot faster than conventional plastics.”

In turn, Professor Thompson, a marine biologist, sought to demonstrate the inaccuracies in Symphony’s claims by showing the BBC reporter an ‘oxo-biodegradable’ bag that had been held underwater for two years and which had retained its structural integrity. 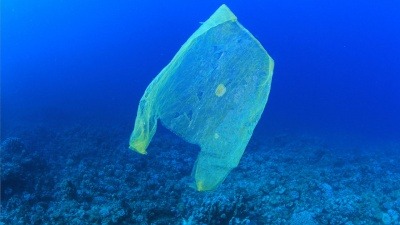 Following the segment’s broadcast, Symphony sought to contest the claims made by Thompson and the BBC’s coverage of the story, with Laurier claiming that the coverage “did not fairly present the scientifically-proven benefit of oxo-biodegradable technology”, although he expressed satisfaction that the BBC had “introduced our company and our d2w technology to a much wider audience.”

Laurier questioned Thompson’s authority on the matter, stating he “is not a polymer scientist”, and went on to state: “It is legitimate for the BBC reporter to question whether d2w technology actually works. To answer that question for ourselves and our customers we have commissioned scientific tests over more than 20 years so as to be quite sure that we would not be making misleading claims.

“Based on this evidence, a d2w plastic product will become biodegradable if exposed to oxygen on land or sea much more quickly than ordinary plastic.

“These tests included successful exposure in seawater at the Bandol laboratory in France, and subsequent testing at Queen Mary University, London.”

The focus on d2w by the BBC also drew criticism from David Newman, Managing Director of BBIA. Newman questioned the rationale behind the BBC offering an equal platform to Symphony, when oxo-biodegradable plastic is a “discredited technology”, stating: “The European Commission has been very clear – there is no evidence to suggest that these plastics biodegrade. The Commission is working on reducing the sales for oxo-fragmentable powders in plastics, even perhaps banning them. That the company that sells them claims one thing and the scientific evidence quoted by the Commission says another, gives an idea of the lack of seriousness of the promoter’s claims.

“We in the plastics industry know that these plastics are not recyclable, not compostable and probably contribute to littering by encouraging the idea that they ‘disappear’ when actually they break down into microplastics likely to be around in the environment for a long time.”

Newman was also critical of the revelation that naturalist Chris Packham, who appeared on the special plastics edition of The One Show on 16 April promoting ‘oxo-biodegradable’ plastics, is a paid advisor to Symphony.

Appearing on the show with Environment Secretary Michael Gove, Packham said: Plastic is always going to escape into the environment. And there are technologies out there, now oxo-biodegradable plastics, which will break down very quickly.”

The Secretary of State, for his part, added that the UK Government was looking into the science and technology behind new types of biodegradable plastics, stating: “The particular type of oxo-biodegradable plastic that Chris [Packham] talks about, I’ve been talking to companies that have an interest in this area and I have got the Government’s Chief Scientific Adviser to look at the science behind it.

“It’s a potentially exciting development. But we need to be certain, actually, that if we’re going to put public money behind some of these schemes that we’re absolutely confident that we deliver the results that the inventors and the entrepreneurs behind them are so anxious to deliver.

Packham did not make the BBC aware of his relation to Symphony prior to the programme and did not declare his interest while on the air.

The BBC was later made aware of Packham’s relation to Symphony, and released a statement saying that, as Packham was appearing on The One Show “in his capacity as a naturalist in his own right”, he was not bound to the BBC’s rules on conflict of interest, which state that a conflict of interest “may arise when the external activities of anyone involved in making our content affects the BBC's reputation for integrity, independence and high standards, or may be reasonably perceived to do so".

The statement continued: "The One Show did not appreciate the full extent of Chris Packham's involvement with the ‘oxo-biodegradable’ industry. If they had been they would have made it clear on the show."

BBIA’s Newman was critical of the BBC for not thoroughly checking Packham’s background in relation to ‘oxo-biodegradable’ plastics, stating: “Poor Mr Packham came out of this badly. As BBIA, we wrote to him some weeks ago after he pushed for oxo powders with Michael Gove on the show, asking him for the evidence behind what he said. We never got a reply. Now we know that he is paid by these people [Symphony]. That may not be illegal but, nevertheless, it calls into question the credibility of the BBC, which should be sure that those appearing on its programmes have clearly declared potential conflicts of interest and are not allowed to speak on those issues publicly.”

A two-month expedition to study the ‘plastisphere’ of the Mediterranean Sea departed from the coast of Italy on Thursday, as scientists seek to study how the alarming formation of a plastic-based marine ecosystem will affect the sea and humans.