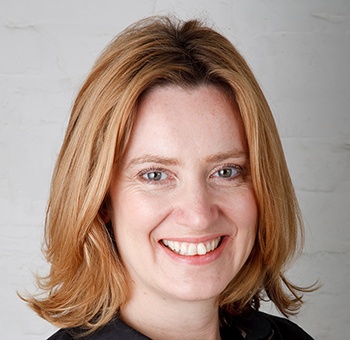 She replaces former Energy Minister and Liberal Democrat MP Edward Davey, who lost his 7,500 majority in his constituency of Kingston & Surbiton on Friday (8 May), when the general election resulted in a Conservative Party majority.

Rudd has a history degree from the University of Edinburgh and has previously worked in investment banking, recruitment, and financial publications. She was first elected to Parliament when she won the seat of Hastings & Rye in May 2010, and retained this position with 44.5 per cent of the vote on Friday.

During her political career, Rudd has been a member of the Environment, Food and Rural Affairs Select Committee (from 2010 to 2012), Parliamentary Private Secretary to the Chancellor of the Exchequer (from 2012 to 2013), and Assistant Whip (from October 2013).

Prime Minister David Cameron announced Rudd’s promotion on Twitter this morning (11 May), as part of a raft of the new Conservative Cabinet member appointments.

Following the news of Rudd's appointment, Simon Bullock, Senior Climate Change Campaigner at environmental campaigning body Friends of the Earth, said: “Amber Rudd has already acknowledged the need to boost renewables and increase investment in energy efficiency – and importantly she recognises the devastating impact that climate change will have without action.

“Her department now needs to make urgent decisions to get the UK off fossil fuels, not least by phasing out dirty coal, and reducing our energy demand and carbon emissions through major investment in energy efficiency and clean renewable power.”

In a somewhat surprise move, Conservative front-bencher and weekly-collections advocate Eric Pickles has been ousted from his post of Secretary of State for Communities & Local Government by Greg Clark, MP for Royal Tunbridge Wells.

Clark was previously Minister for Universities and Science, and was Minister of State for DCLG with responsibilities for decentralisation and planning policy in 2013.
He has also held positions as Director of Policy for the Conservative Party for three successive leaders – William Hague, Iain Duncan Smith, and Michael Howard – and was appointed Shadow Secretary of State for Energy and Climate Change in October 2008, having previously been Shadow Minister for Charities, Social Enterprises and Volunteering.
There is no news yet on whether Pickles will be taking up another role in the cabinet, but he tweeted earlier today that an announcement will be made later this week regarding his ‘new role’.

I could not wish for a better successor than @gregclarkmp He will do a fantastic jog. More announcements later in the week of my new role

Prime Minister David Cameron made the announcements on Twitter this morning (11 May), as part of a raft of the new Conservative Cabinet appointments.

The position of Secretary of State for Environment, Food and Rural Affairs will continue to be held by Liz Truss, Conservative MP for South West Norfolk, who was appointed to the role in July 2014.

Commenting on her re-appointment Truss said: "It is a privilege to serve in this government and I am delighted to be returning as Environment Secretary.

"Growing the rural economy, delivering for our food and farming sector, helping our rural communities continue to thrive and ensuring the protection of our natural environment will be my priorities and I look forward to getting to work as soon as possible."

Following the election last week, former Liberal Democrat Resources Minister Dan Rogerson – who also held the joint title of ‘Ministerial Champion for the Bioeconomy’ along with Conservative MP Matthew Hancock – has lost his seat as MP for North Cornwall. His replacement at Defra has not yet been announced.

Other members of cabinet that have been confirmed so far include:

Calls for government action on resources

The Environmental Services Association (ESA), a trade association for the UK’s resource and waste management industry, today welcomed the appointments made in the cabinet reshuffle, with Executive Director Jacob Hayler adding: "Following the reshuffle, and in the absence of an over-arching Office of Resource Management, it is important that government departments work together to further the UK’s resources agenda.

"A key environmental priority for the next government should be to find a way for the UK to meet its 2020 household recycling targets without local authorities going bust. The industry is keen to help the government solve this conundrum, as well as other key issues affecting our sector.

"One of our main concerns is waste crime, and the government must maintain the momentum created by the previous administration, by continuing to support the industry and the Environment Agency in the fight to reduce the impact that waste crime has on the environment and the economy."

A full list of the new appointments is available online.

Union is strength?
By
Annie Kane
| 29 January 2014 |
Add a Comment
Annie Reece takes a look at how the union has influenced waste policy and how an EU exit would affect UK waste management.