A recent study has found that susceptibility to turning into roadkill may be driving evolutionary forces. Biologists Charles Brown and Mary Bomberger Brown noticed that over the last 30 years, the number of road-killed cliff swallows in southwestern Nebraska has declined. They found that those found dead at the roadside had longer wings than their corporeal cousins, suggesting that swallow wingspans were shrinking to make them more agile, and thus more able to avoid oncoming traffic. On the road of life, survival of the fittest is indeed the name of the game.

There are some interesting culinary propositions out there, but the latest? Well, the state of Montana is set to join a number of others in allowing its residents to salvage and consume roadkill. Following initial approval of the bill by the Senate, pioneering food buffs are said to be readying all manner of recipes to deal with what would previously have been the wasted resource of wasted animal lives. Hungry residents in need of a quick fix won’t be permitted to go on squirrel-killing sprees and would have to obtain a permit to collect the remains of unsuspecting mammals from the roadside. We’re betting that most residents of Montana won’t forgo the culturally stereotyped Big Mac in favour of char-grilled possum, though, but in case you’re wondering, it’s legal to collect and eat roadkill in this country as well, just so long as your car isn’t the murder tool... 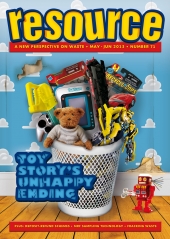 This article was taken from Issue 71

In a striking bid to improve the recycling rate of the animal kingdom, British fashion designer Jess Eaton is gearing up to unveil some wild bridal designs. While it would be tricky to claim that no animals were hurt in the production of these garments, none were hurt for their production, and Eaton notes her materials (yes, roadkill again) are ethically sourced. She said: “I never, ever kill animals for our designs and we wouldn’t accept anything that has been killed for the purpose of turning it into a fashion item.” Her ‘Roadkill Couture’ will be on display at London’s White Gallery in May, before going on sale at her shop/studio, EatonNott, in Brighton.

A New Kind of Squishy

Roadkill’s becoming so popular these days that some toy designers are even looking to get in on the act, releasing roadkill-inspired plush toys for humans and their pets alike. That’s right, aptly-named toy producer ‘Roadkill Toys’ has embraced the ‘squashed plush’ idea, and has designed a number of cuddly toys – all with bulging, bloodshot eyes; tyre treads; and ample, squidgy innards on display. The toys even come with their own body bags and blood-splashed death certificates. (And while you’re at it, you can even get a squeaky roadkill toy for your dog from All for Paws – these also feature some lovely tyre treads and come in both rat and fox variety.) They’ll either be a massive hit or you’ll give someone the fright of their life, but either way excitement is guaranteed. Fun has never been so macabre, though Resource wonders whether the world truly needs such a product...