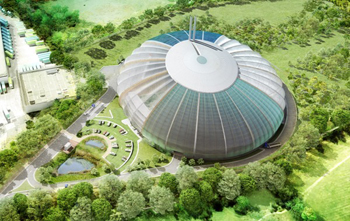 The Environment Agency (EA) has issued Veolia with a permit to operate an energy from waste (EfW) incineration plant in New Barnfield, Hertfordshire.

The EA says it reached its decision to grant the environmental permit ‘following consultation and a thorough assessment of any potential impacts’. It will require Veolia to comply with relevant legislation including strict air, odour, noise and vibration emissions and monitoring standards.

The EA concluded that it was ‘satisfied’ that Veolia will ‘carry out activities in accordance with the permit, without harm to the environment or human health’.

As part of Veolia’s 25-year waste contract with Hertfordshire County Council, the waste management company will process up to 380,000 tonnes of municipal waste per year, with 352,000 tonnes being incinerated. The remaining 28,000 tonnes is expected to be recycled.

In addition to this, 600 tonnes of healthcare waste will also be incinerated.

Environment Manager Debbie Jones said: “After carefully considering all of the responses from the community made during the consultation period, we have decided to issue the environmental permit.

“We are satisfied it contains the necessary conditions and control measures to ensure the protection of people’s health and the environment. Should the New Barnfield energy-from-waste incinerator be built, we will monitor its environmental performance, including emissions to air, to ensure that it meets its permit conditions.”

Veolia welcomed the granting of the permit, saying the plant will ‘make a major contribution towards the delivery of ambitious targets for more sustainable waste management in Hertfordshire’.

Keith McGurk, Regional Director for Veolia, said: “The decision to grant our permit recognises that this facility is a crucial part of Hertfordshire’s strategy to minimise the amount of waste sent to landfill – a response to both cost and environmental pressures.

“Waste is a valuable resource and energy from waste facilities have a critical role to play”, he added.

However, the plant has received considerable opposition. In January 2013 the Department for Communities and Local Government (DCLG) called in Veolia’s planning application, meaning it will now be subject to a public inquiry overseen by an independent planning inspector.

This comes after the DCLG issued a holding direction to Hertfordshire County Council in November 2012 (removing its ability to grant planning permission) amid claims that it had ‘casually dismissed’ 6,300 responses from the public opposing the project over health and environmental fears.

Local group Hatfield Against Incineration (HAI) claim that the incinerator is ‘massively opposed… not only by thousands of residents both local and from wider in the county’, but also by ‘Welwyn Hatfield Borough Council, Hatfield Town Council, local Parish Councils, North Mymms Green Belt Society, and many other local organisations’. It was also opposed by national Statutory Consultees, including English Heritage.’

A statement on the HAI reads that as well as environmental impacts, ‘there is not enough non-recyclable and non-compostable domestic waste to feed an incinerator now’ and that rising recycling rates and falling waste levels mean that ‘there will certainly not be enough in 25 years time’.

This reflects mounting fears that the UK’s over-reliance on incinerators will see recyclable waste fed to incinerators to make up the shortfall and keep it running.

Furthermore, HAI states that the proposed site’s proximity to a local wildlife site and homes would have an adverse impact on local communities, as would the fact that it is to be built on a Green Belt site.