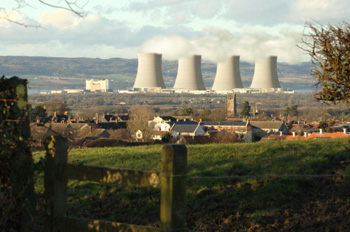 Put up for market in March 2012, the Horizon Nuclear Project was abandoned by German owners E.ON and RWE after confidence fell in the technology following the Fukushima disaster in Japan, and ongoing financial constraints put pressure on the project due to the economic crisis.

The Hitachi transaction, expected to be completed in November, reportedly cost the company £700 million and will see two to three 1,300-megawatt (MW) Advanced Boiling Water Reactor (ABWR) plants being built at Horizon sites in both Wylfa Anglesey and Oldbury, Gloucestershire. The first plant is expected to be operational by 2020.

It is expected that these plants could power 14 million homes over 60 years and help protect the UK from potential energy ‘blackouts’ in the future.

UK firms Babock International and Rolls-Royce have signed Memoranda of Understanding (MoUs) to join Hitachi to plan and deliver the programme.

According to Hitachi, the deal will see 5,000 to 6,000 jobs created at the construction stage at each of the sites, with a further 1,000 permanent jobs being made available at each site once operations start.

Hiroaki Nakanishi, President of Hitachi Ltd announced the acquisition today, saying: “I am extremely pleased that we have been successful in acquiring Horizon Nuclear Power. Today starts our 100-year commitment to the UK and its vision to achieve a long-term, secure, low-carbon and affordable energy supply. We look forward to sharing Hitachi’s corporate vision and nuclear business policy with the management and employees of Horizon, and working harmoniously with UK companies and stakeholders for the delivery of this vital part of Britain’s national infrastructure and the creation of a strong UK nuclear power company.”

Prime Minister David Cameron welcomed the acquisition, saying: “I am determined that Britain competes and thrives in the global race for investment. This is a decades-long, multi-billion pound vote of confidence in the UK, that will contribute vital new infrastructure to power our economy. It will support up to 12,000 jobs during construction and thousands more permanent highly skilled roles once the new power plants are operational, as well as stimulating exciting new industrial investments in the UK’s nuclear supply chain. I warmly welcome Hitachi as a major new player in the UK energy sector.”

Energy and Climate Change Secretary Edward Davey added: “Hitachi bring with them decades of expertise, and are responsible for building some of the most advanced nuclear reactors on time and on budget, so I welcome their commitment to helping build a low-carbon secure energy future for the UK. I particularly welcome Hitachi’s firm commitment to involve the UK supply chain and local workforce.

Horizon is just one of three new nuclear ventures under way in the UK. EDF Energy has plans to build at Hinkley Point in Somerset, and NuGen hopes to develop a site at Sellafield.

Hitachi will now work to obtain licence acceptance under the Generic Design Assessment process as governed by the Office for Nuclear Regulation.

Davey also today announced the creation of a new Nuclear Industry Council (NIA). According to DECC, the council will play a ‘strategic role in helping ensure that the UK’s nuclear industry can build on its strengths and develop the new capabilities needed to compete in a competitive global market’ and ‘reflects the government's desire to build a strong industrial strategy in partnership with industry across a range of key sectors’.

Davey said: “New nuclear isn’t only about keeping the lights on and emissions down, it’s an industrial strategy with big potential wins. The Nuclear Industry Council I’m announcing today will play a crucial role in this, and I believe there’s the potential for the UK to become globally recognised as the go-to place for the next generation of nuclear.”

The council will be chaired jointly by government and industry representatives, with Edward Davey (or Energy Minister John Hayes) and Business Minister Michael Fallon representing the government and Lord Hutton, Chairman of the Nuclear Industry Association, acting as Chairman.

Also in the works in a Nuclear Supply Chain Action Plan, which is expected to be published by government and members of the nuclear industry later this year. DECC says that the plan will: maximise UK economic activity and growth from the nuclear sector; ensure the domestic nuclear market provides a platform for export; and raise awareness of nuclear sector opportunities.

NIA Chairman John Hutton said: “The new council symbolises the long-term strategic partnership developing between the UK nuclear industry and the government. Through innovation and high-skilled job creation, the nuclear sector has the potential to be a driver of economic growth in the UK over the coming years. Our ambition is for it to be a globally recognised industry, with UK companies seeking and winning opportunities in the domestic and global nuclear markets.”

The government is in the process of determining a cap on how much it will pay for electricity generated by new nuclear power stations. While Davey insisted he was not in price talks with Hitachi at the moment, it has been reported that ministers and the French group EDF are close to agreeing the crucial 'strike price' for energy generated at Hinkley Point. The strike price would give a guarantee to EDF, on the lowest payment it would receive for its nuclear-generated power. If the market price falls below this, EDF would be paid the difference, which critics argue is effectively a subsidy for nuclear power.

In addition to this new potential ‘subsidy’, it has long been argued – including in this very magazine – that the public heavily subsidises nuclear waste disposal (to the tune of £1,000 per person, per year), and would bear some of the costs of a nuclear cleanup, should such an eventuality come to pass.

Friends of the Earth's Energy Campaigner Guy Shrubsole said: "This is a risky and expensive gamble for Hitachi that other energy firms are unwilling to take - and contrary to the promises the Coalition has made, the public will end up funding it.

"Nuclear has always delivered late and over budget, and crucially it won't reduce emissions until the 2020s, when to tackle climate change, we need emissions cuts to happen straight away.

"The government should listen to the vast majority of the public who back renewable alternatives from our wind, sun and sea - investment in clean British energy like this is creating jobs and bringing down costs, while the price of nuclear is going up."

The government is shortly expected to introduce its Electricity Market Reform (EMR), which will bring about new feed-in tariffs for power generation, including nuclear power. Surprisingly, some environmentalists have welcomed the move, as it could require nuclear companies to share their fully-burdened cost sheets, which are rarely publicly reported. However, there are concerns that the tariffs will not take into account the time and energy that goes into building a nuclear plant; it can take upwards of a decade to bring a nuclear power plant online.

OPRL hopes to reduce confusion and inconsistency with its new recyclability certification scheme, ‘Certified As Recyclable’, in collaboration with RECOUP.

The UK should price emissions from waste disposal, including landfill and incineration, to help reach the country’s target of net-zero carbon emissions by 2050, according to a new white paper by the Zero Carbon Campaign.

64 per cent of UK residents would like to see manufacturers pay for recycling instead of local authorities, according to a YouGov poll commissioned by UK waste management company Viridor.

50 per cent of plastic used in Coca-Cola’s core portfolio in Great Britain is now recycled, but the company calls for better designed DRS in order to achieve an entirely circular recycling scheme.

This year, Recycle Week 2020 (21-27 September) will celebrate the British public’s commitment to recycling during the Covid-19 pandemic lockdown, with research showing that nearly nine in ten households ‘regularly recycle’.